Your Brand Colors: How they impact emotions & behaviour 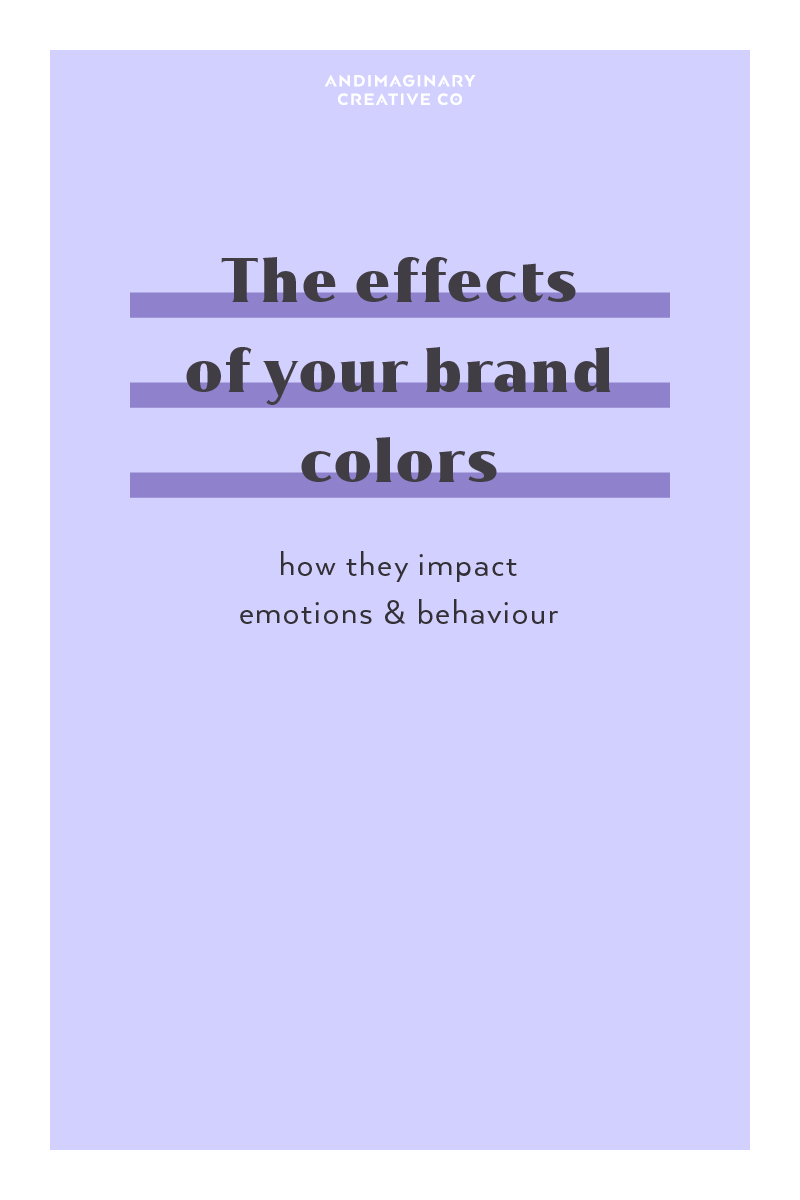 Colors have an important role in brand identity. Depending on what brand colors you choose you can affect your audience and customers in different ways: you can cheer them up, calm them down or stir up feelings of nostalgia in them.

Your brand colors also build brand recognition. Just think about the red and yellow combination of McDonald’s or the strong magenta of Deutsche Telekom. I still have one of those magenta Frisbees, that they handed out on a free Brian Adams concert back in a Budapest T-Mobil Day. Every time I see that magenta, I think of that day, that concert and unavoidably, T-Mobil…

This is why it’s very important to choose the right brand colors for your business.

In this new blog post series, I’m going to teach you all the nitty-gritty details you must know about brand colors:

So let’s start by understanding the emotions and the behaviours that colors can trigger in us.​

Before we start it’s important to note, that cultural differences often play a role in how people relate to colors. For example, while wearing orange in the US can be associated with prison uniforms, in Buddhist culture it has a positive, spiritual meaning.

Red is the warmest and most dynamic of all colors. As a warm color, it evokes feelings of optimism, energy and happiness. Red is also considered to be the color of passion and romance. However, when you use an overwhelming amount of red, it can increase a person’s heart rate and make them excited. This is why red color is used for expressing danger (think about traffic signs and lights) or even anger.

Like the other warm colors, orange can be very attention-grabbing, so it’s often used in advertising. Orange – when used in limitation – is a happy, refreshing, uplifting color. If you go over the board, it triggers a sense of danger, just like red.

The way we see orange around us plays a major role in how we feel about it. While a nice autumn scenery or sunset makes us feel happy and refreshed, zillion orange traffic cones on a highway makes us alert – and sometimes a bit frustrated.

This is why companies linked to nature, creativity or traditions can benefit from using orange (think about Etsy), while tech companies, lawyers, financial advisors should use it with limitation.

Yellow is a warm color that’s often described as energic and cheery. It’s often associated with sunshine and laughter. It can appear bright, yet it can also lead to visual fatigue when over-used.

Due to the high amount of light that it reflects, it’s one of the most tiring colors for the eye. Avoid using it on big surfaces (e.g. website background). Instead use it where you want to grab attention.

We often associate pink with all the things feminine, girly or romantic (think about all the Valentine’s Day decoration). However, there’s more to pink than being Barbie’s signature brand color.

A lighter shade of pink, called “drunk-tank pink” have a relaxing, calming effect. In fact, many prisons used this specific pink for their walls to calm the inmates. Newer research shows that even though this relaxing effect was true, it only lasted for an initial period. The affected people became even more agitated once they become accustomed to the color.

Other, darker shades of pink – like fuchsia or magenta – have a modern, playful, creative feel when used in branding. They can be quite stimulating, and energetic.

Last but not least, since pink is considered a feminine color, it often triggers thoughts associated with femininity: softness, kindness, nurturance and compassion.

Purple has the strength of red and the calmness of blue which makes it a very intriguing color.

Historically, purple represented wealth and higher rank in society, because the dies used for creating purple textile was one of the most expensive. Even though this changed over the centuries, purple is still considered to be the color of prestige and luxury.

Purple is also tightly connected to spirituality and wisdom. It’s often seen as a mysterious color, connected to the unknown and supernatural.

Blue is a color and it’s one of the most popular colors. It has a calming, cooling effect. It also symbolizes reliability and stability.

But be careful, blue is often connected to the feeling of sadness and loneliness – just think about the expression “feeling blue”.

In some cultures (like in US), blue is also closely connected to traditions, and patriotic feelings when combined with red.

Blue is one of the least appetizing colors – because it rarely occurs in natural food – so it’s not a good choice for food & gastronomy related brands.

Green is a cool color that’s the most commonly found color in nature, so it has soothing, renewing, harmonious effect on people.

Green is also the most calming color for the eye (especially pine greens) because our eye is constructed in a way that makes focusing on green light the easiest (it’s in the middle of the visible spectrum and has the strongest receptors).

It’s also good for us psychologically, as it’s alleviate depression, nervousness and anxiety.

In some cultures, green represent luck (Irish), while for others it’s more related to envy (like the expression, “green with envy).

Brown brings to mind feelings of warmth, comfort, and security. It's often described as natural and down-to-earth, but brown can also be sophisticated if you pick the right shade.

Brown is a natural color that evokes a sense of strength and reliability.

It reflects wholesomeness, provides a connection with earth and gives a sense of orderliness.

But be careful with the amount of brown you use. It can also create feelings of loneliness, sadness, and isolation. In large quantities, it can seem vast, stark, and empty, like an enormous desert.

Gray is a cool, neutral color. When used in branding it reflects a timeless, sleek, sophisticated vibe.

It’s also an emotionless, moody color. It’s sometimes associated with meanings of dull or dirty depending on the context it’s used in.

Gray is a perfect neutral, which is why designers often use it as a background color.

Black represents a lack of color. Black is authoritative and powerful. It can evoke strong emotions, so too much can be overwhelming. It is a classic color for clothing, possibly because it makes the wearer appear thinner and more sophisticated.

It also provides a restful emptiness and it’s considered as a mysterious color because it evokes a sense of potential and possibility. 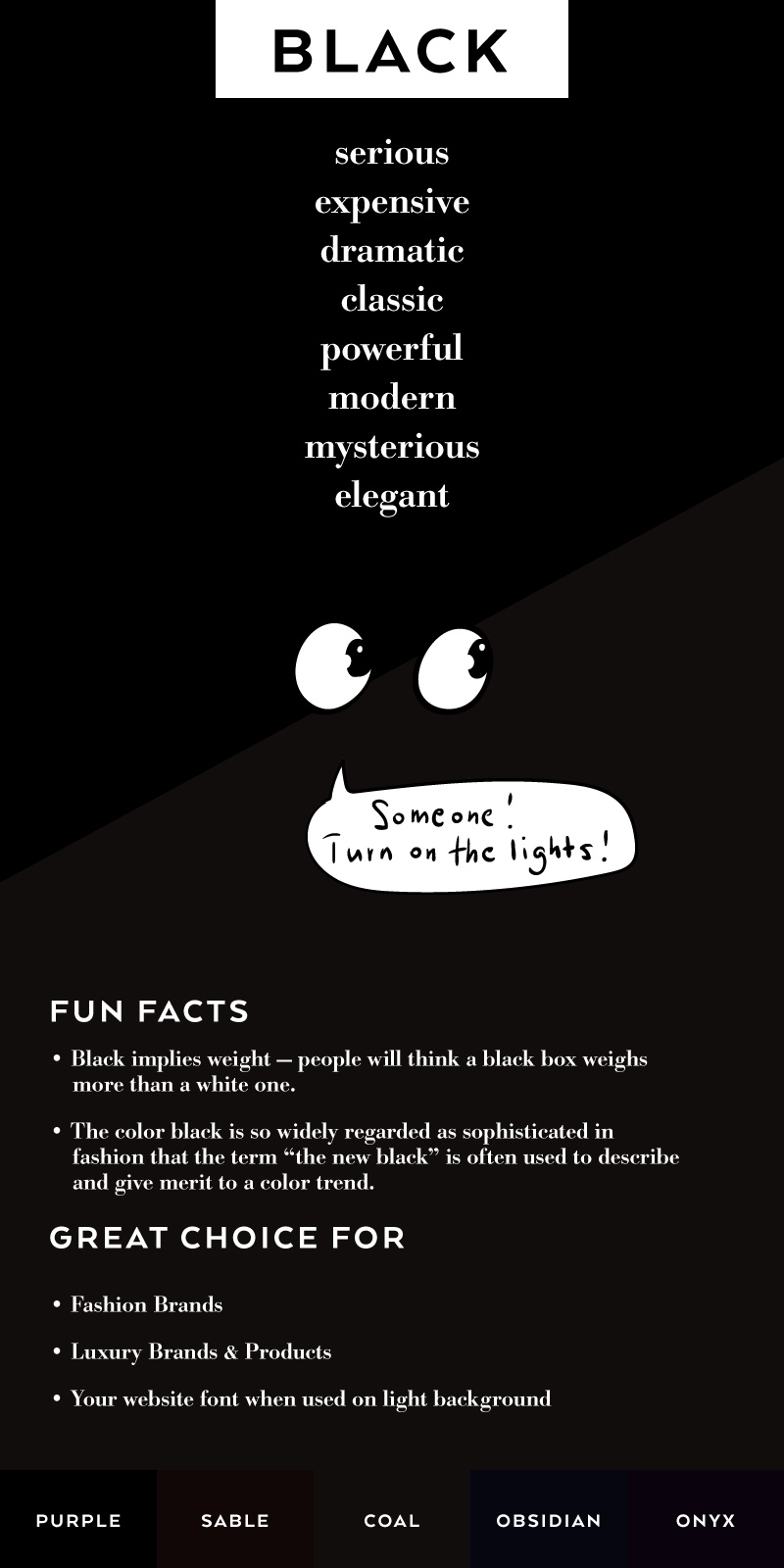 The white color aids mental clarity, it encourages us to clear clutter or obstacles. It evokes purification of thoughts or actions and enables fresh beginnings.

When you use lots of white, you show that your brand is simple, modern and clean.

HOW COLORS MAKE YOU FEEL?

Now I want to hear from you: how do these colors make you feel? What’s the color you want to choose for your brand and why did you pick it? Share it in the comments.

Next week we continue our adventure in the realm of brand colors, so stay tuned.